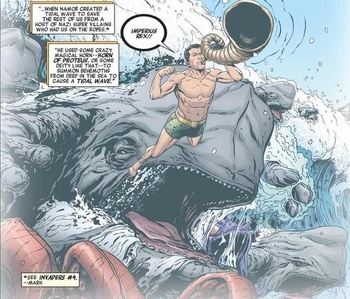 Namor blows! (And summons a horde of sea monsters)
"And Joramun blew the Horn of Winter, and woke giants from the Earth."
— Arc Words, A Song of Ice and Fire
Advertisement:

Horns are among the oldest, and loudest, musical instruments. Their ability to be heard over the din of battle gave them a key role in many historical armies, and their descendant the bugle is still used in this way today. This association means that horns in fiction often have strong symbolic links to warfare, leadership, defiance, and destruction.

Horns in fiction tend to figure in three main ways: Horns of Summoning, Horns of Inspiration, and Horns of Destruction.

These horns are used to rally demoralized soldiers, to bring people to a central meeting place, and when Gondor Calls for Aid. If the soldiers are too far away to be helpful, horns can call out the peaceful townsfolk to form the Home Guard. In fantasy settings, they may be Summoning Artifacts that unseal a Sealed Good, Evil, or Army in a Can.

Let's Get Dangerous!, in horn form. The non-verbal equivalent of the Rousing Speech; bonus points if it's the Charge Fanfare. They may signal the arrival of The Cavalry (often literally) and give Status Buffs. They're commonly played by The Bard.

Film - Live Action
The Return of the King: When the forces of Mordor are on the verge of overtaking Minas Tirth, a peal of horns announces the arrival of the massive Rohirrim cavalry, helping to turn the tide.
Literature
Myths & Religion
Video Games
Western Animation

These horns are bad news. In fantasy and mythological contexts, the horns themselves cause destruction and death when sounded. In more realistic settings, they cause dread to those who hear them. There's some overlap with the first type of horn, though—a horn that successfully rallies an army means the other army isn't likely to fare so well. Compare Musical Assassin.

All of the instances in which Spinel turns her fingers into a horn to manipulate her injector with.

All of the instances in which Spinel turns her fingers into a horn to manipulate her injector with.