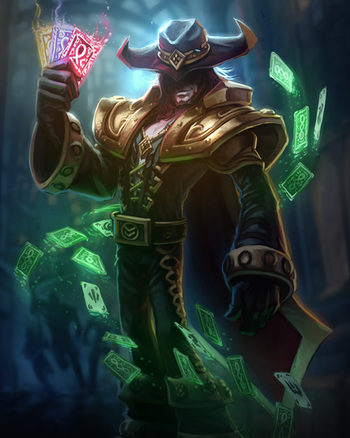 A form of Ancient Artifact, Cards of Power are small, rigid pieces of paper or cardboard which possess paranormal or magical powers. The abilities they possess vary widely from one narrative to another. In some works, they can summon creatures or monsters. In others, they are used to cast spells or as a Transformation Trinket. They are also often tarot cards and may use Tarot Motifs. If the cards are always shuffled, this can be a way to create risk in casting spells - you know you'll get something, but it's impossible to know what.

A Sub-Trope is Ofuda, a Shinto talisman of protection.

Compare Death Dealer, when the cards are used as physical weapons.

For a version specific to video games, see Fight Like a Card Player.