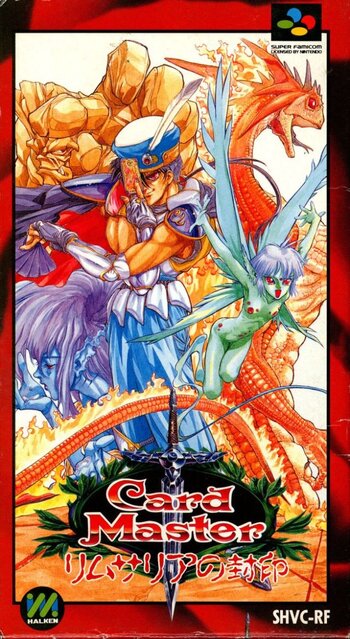 An RPG released for the Super Nintendo Entertainment System by HAL Laboratory, one of the only RPGs the company would ever work on. Known as Card Master: Seal of Rimsalia in Japan, Arcana is the story of a young warrior named Rooks and his attempt to fulfill his destiny as the last of the Card Masters.
Advertisement:

The island of Elemen is home to six kingdoms, which have frequently engaged in war and bloodshed. But these wars were not the greatest threat the land faced, as the evil goddess Rimsalia attempted to destroy the entire island and claim it as her own. She was thwarted by the Card Masters, an order of wizards who wielded tremendous magical power in the form of the playing cards they carried. Rimsalia was sealed by the Card Masters, and peace returned to Elemen for a time. Ten years ago, however, the darkness returned in the form of Galneon, the court magician of the kingdom of Lexford, who murdered King Wagnall and seized power for himself. When the Card Masters opposed him, Galneon murdered as many of them as he could find, until a young man named Rooks was the only Card Master remaining. At the same time, Galneon prepared to undo the seal that bound Rimsalia, and return her to the world. Now, Rooks sets out on a desperate quest to stop Galneon before he can fulfill his goals and bring ruin to the world.

The game is known for its immersive atmosphere, a unique elemental system, and Awesome Music by composer Jun Ishikawa (who also produced the original soundtrack for Kirby's Dream Land 3).