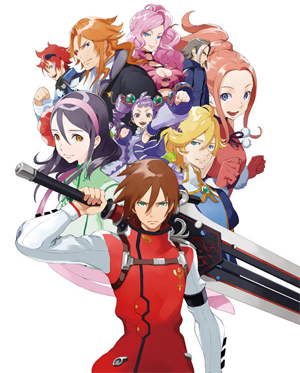 Clockwise from bottom: L'Arc Bright Lagoon, Ryfia, Niko Bennex, Serge, Leslie Ferrati, Rastan Oigen, Adele Nevanlinna, Alfonse Zena Meridia, and Cecille Garcia.
In the center of this chaos, the god Eesa created Real and Imaginal in his own image. By picking the laws they represent, the hymn of ruination was destroyed and the paradise of Noire was born. So went the beginning of this world.
Advertisement:

Arc Rise Fantasia is an Eastern RPG on the Wii, developed by imageepoch and published by Marvelous Entertainment.

Fulheim is a world plagued by Feldragons, mysterious crystallization of the land, and tense relations between the countries that inhabit it, who are on the verge of war. The god Eesa has not been heard from for years, and so the world is losing its way, now headed on a path for destruction.

L'Arc Bright Lagoon is a legionnaire working for the Meridian Empire, whose simple life is turned upside down when, on a mission gone awry, he has a fateful encounter with Ryfia, a strange girl who calls herself the Imaginal Diva. It doesn't take long before L'Arc is discovered to be the Child of Eesa, the one destined to present a Law to Eesa and bring prosperity and guidance to the world.

Or so the idea is supposed to go, at least. Needless to say, the truth ends up being far, far more complicated than that.

The game was released in Japan on June 4, 2009, and in North America on July 20, 2010. Developed under the title Project Ray, it shares the same project title with another game by the same developers, Sands of Destruction. Arc Rise Fantasia, however, in essence, can be considered a title in spirit of the Luminous Arc series, because of a handful of similarities with it.