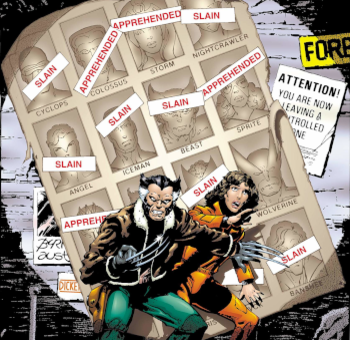 "First, we kill all the subversives; then their collaborators; later, those who sympathize with them; afterward, those who remain indifferent; and finally the undecided."
— General Iberico Saint Jean, on Argentina's National Reorganization Process
Advertisement:

When a character, usually a villain, takes over The Government, The Syndicate, the Ancient Conspiracy, or otherwise takes power in some way, often the first item on the character's agenda is ordering the deaths of many characters. Usually, these characters represent the only serious internal threat to the new regime. These aren't just Muggles, though; these are characters we know (and possibly love) from before, usually killed off via a quick montage cutting between several locations. No big ceremony, just them dying horribly. This is an effective way to drive home the power and ruthlessness of the new regime.

As the Real Life sub-page attests, this is often Truth in Television. The strongest threats to an organization are often from within, and consolidation of power often includes removing those threats as swiftly and permanently as possible. Ironically, extensive early purges often lead to instability later on when the loss of talent, experience, and dissenting opinion creates an incompetent Yes-Man culture and sets up a Succession Crisis because of the power vacuum.

As some of the other real-life examples show, though, a purge isn't necessarily lethal. New leadership may simply decide to replace existing officials with their own choices, with the old officials simply losing their jobs rather than their lives.

If this is a major feature of a character's Backstory, it usually leads to the character becoming the Sole Survivor of the purge, possibly even the Last of His Kind. Compare You Have Failed Me, in which individual minions are singled out for punishment. Ruling Family Massacre is a subtrope for the specific example of a monarchy being lethally purged. Variants include Crushing the Populace when done by an existing regime, and Reign of Terror when done by a victorious rebellion.

Not to be confused with the movie The Purge, although it is an example of this trope.

The Rains of Castamere

Jamie Lannister recounts how his father Tywin became infamous through his purge of two rival houses: House Tarbeck and House Reyne - both of whom were completely exterminated so that nobody in the Westerlands would dare question House Lannister's supremacy ever again.

The Rains of Castamere

Jamie Lannister recounts how his father Tywin became infamous through his purge of two rival houses: House Tarbeck and House Reyne - both of whom were completely exterminated so that nobody in the Westerlands would dare question House Lannister's supremacy ever again.