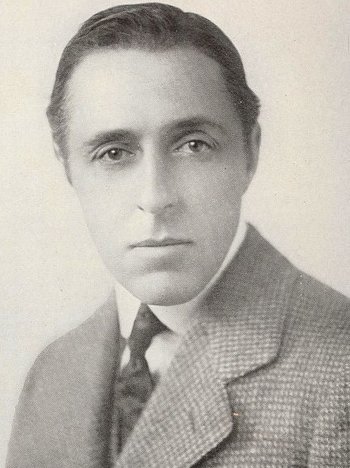 "What modern movies seem to be lacking is the sense of the wind in the trees."
— Griffith, in one of his final interviews.
Advertisement:

David Wark "D. W." Griffith (January 22, 1875 – July 23, 1948) was one of the greatest filmmakers of the silent era and a pioneer in developing motion pictures as an art form. He was, arguably, the first person to become famous as a movie director.

He was also The Pioneer of several common features of American cinema; his short films for the Biograph Company like A Corner in Wheat introduced radical editing techniques and sophisticated storytelling that few had seen before. He also directed the early appearances of major movie stars like Mary Pickford (The New York Hat) and longtime collaborator, Lillian Gish (The Mothering Heart) and created movie genres. His 1912 short film, The Musketeers of Pig Alley endures as the "world's first gangster film" and was shot on location in New York's mean streets and would later inspire Martin Scorsese's GoodFellas. He also directed the first major adaptation of Edgar Allan Poe, with The Avenging Conscience (an adaptation of The Telltale Heart) which while primitive by today's standards, is fairly advanced for its use of multiple exposures and special effects. Griffith was also the first major film-maker to shift from New York to the fertile climate of Hollywood in Los Angeles, thereby becoming the "father of Hollywood" though, ironically, he operated and functioned as an independent film-maker for all his life, very particular in maintaining copyrights and inscribing his initials in all his intertitles.

His first feature (after directing hundreds of short films since 1908) was a Bible story, Judith of Bethulia, released in 1914. The next year he hit it big with The Birth of a Nation, which was a massive critical and commercial success. The Birth of a Nation was wildly innovative, both in its running time (193 minutes, far longer than even the few feature films made prior to that date), and in Griffith's use of night photography, continuity editing, cross-cutting, staging of battle scenes, and use of motion pictures to tell a story of epic scope. It was a huge financial success, becoming the highest-grossing film at the time. It was also horrifically racist, showing the Ku Klux Klan as the good guys, so racist that even in 1915 it stirred up widespread protest.

Stung by the charges of racism, Griffith followed up The Birth of a Nation with Intolerance, a film showing the effects of intolerance on human society over different periods in history while simultaneously comparing Griffith's critics to the intolerant. Intolerance was an even bigger spectacle than The Birth of a Nation, running over three hours and requiring some massive sets

◊. It was a commercial failure due to both the high production cost ($2.5 million in 1916 money) and the fact that it was released during the middle of World War I, which caused people to mistake it for an anti-war film just months before the US had entered the fray, but is remembered as a classic. Griffith followed up Intolerance with hits such as Broken Blossoms (1919) and Way Down East (1920) but his career went into decline in The Roaring '20s and his last film was released in 1931. He got a special Academy Award in 1935. Griffith died in 1948. Six of his films are preserved in the National Film Registry: Lady Helen's Escapade, A Corner in Wheat, The Musketeers of Pig Alley, The Birth of a Nation, Intolerance, and Broken Blossoms.

Griffith served as The Mentor to several young film-makers. Erich von Stroheim appeared as an actor in his films, while Raoul Walsh, the future director of High Sierra and The Roaring Twenties (1939) appeared as John Wilkes Booth in Birth of a Nation. The young John Ford played an extra in that same film. Despite the reputation of The Birth of a Nation, he remained highly respected as Our Founder for directors around the world.

Griffith was also of one of the co-founders of United Artists.