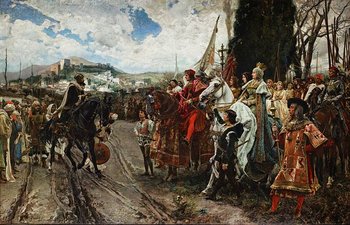 Rendition of Granada to the Catholic Kings Isabella of Castille and Fernando of Aragon
Hoc signo tuetur pius, hoc signo vincitur inimicus.note This sign protects the pious, this sign defeats the enemy
— Inscription of the Cross of Victory, symbol of the kings of Asturias
Advertisement:

The Reconquista was one of the most iconic settings of medieval history and is amongst the most, if not the most, known periods concerning the history of the Iberian peninsula (comprising modern Spain and Portugal), this was the time when Christian Iberians fought against the rule of the Muslim Moors to retake their country from the invaders, a time of constant conflict and small kingdoms, all banded together under the guidance of the Cross.

The real history, as it is often, is not as simple as what the general description might indicate.

For starters, one of the things that must be understood is that despite the name, the Reconquista was not just a Spanish endeavor in the modern sense of the word, the Spain as we know it today never came to properly be until the union between the Catholic Kings and, as we will detail further below, the Reconquista ended sooner for some of the Kingdoms involved.

We pick up after the fall of the Visigothic realm in the midst of the Late Antiquity, the power of the Goths had been waning in Western Europe in favour of Frankish hegemony amongst the many Germanic kingdoms that rose from the ashes of the Western Roman Empire and, with the invasion of the Lombards, the power of their Ostrogothic cousins came to an end. Around this time, King Reccared took the pivotal decision of converting the state religion of the Visigoths from Arrian Christianity to Catholicism which served to unify the people of the peninsula under one single denomination: Hispani, which would be a decision that would affect the peninsula's destiny in the years to come.

The rise of Islam, and the wars of expansion that came with it, changed the entirety of the reality in the Mediterranean in an irreversible way that would mark the end of the shared history amongst the people of the Mare Nostrum, which shared religion and some degree of cultural affinity until the ascension of the Rashidun, and eventually Umayyad, Caliphate. As it happened, the reason for this was not only the loss of territory from the Christian Basileus to the Arabian newcomers that shocked the world so, but the already showing rifts between the churches in the provinces of Egypt (Miaphysite Christians) and Africa (Donatist Christians) that would later lead to the religious shift from Christianity to Islam in the north of Africa. Around this time, the squabbles amongst the Visigothic nobles and the kings turned from bad to worse, ending in a civil conflict at the ascension of King Roderic, who is said to have usurped the throne from the sons of the previous king Witiza, which meant that the disunified Goths were unable to resist the eventual invasion of their kingdom by the Berber vassals of the Umayyads (hence the term Moor to refer to the Muslims), the army of Tariq ibn Ziyad overwhelmed the disunified nobles and took control of most of the peninsula after the disastrous defeat of the Visigothic army in the battle of Guadalete, in which many nobles including the usurper king died.

One noble however, known as Pelayo, managed to survive the perilous combat and escaped north; as other of the noble fled to the neighboring kingdom of the Franks, he instead went towards the Cantabrian mountains as the kingdom became a province of the Caliphate to form a resistance against the Islamic invaders, first refusing to pay the taxes that non-Muslims had to pay and later turning to a rebellion with small military action, aided in part due to the difficult terrain that protected the rebel province and the deviation of attention from the Muslims to the conquest of the Franks, it was after their memorable defeat in Toulouse that gave rise to Charles Martel that the commander of the Umayyad army decided to take serious action against the Iberian rebels to at least save face, this however lead to the famed battle of Covadonga in which the Asturian rebels, lead by Pelayo himself, managed to defeat and rout the enemy in such a manner that the Umayyad would never again try to challenge the independence of the new Kingdom: The Kingdom of Asturias.

The Kingdom of Asturias was the first of the new Iberian kingdoms from which all of the eventual kingdoms from the medieval period to beyond would have some claim of continuity and it's this kingdom that would start the Reconquista: the many skirmishes that soon followed after the victory at Covadonga managed to inspire the fellow Galician and Asturian nobles to rally to Pelayo, who would spend his realm trying to fortify to his alliances with the local nobility through strategic marriages, his lineage didn't survived him though and after the death of his son Favila without any children of his own the crown passed to the house of Cantabria through the marriage of Pelayo's daugther Ermensinda and Alfonso, son of Pedro, duke of Cantabria and said to be a descendant from the aforementioned Visigothic king Reccared.

This dynasty, known as the Astur-Leonese or Beni Alfons (children of Alfonso in Arabic), coexisted with the much more known Carolingian dynasty during its inception and would make gains to the south of the Cantabrian mountains and into annex the territory of Galicia and Leon while the Franks conquered the north of Spain, forming the Mark of Spain (Marca Hispanica) from the regions of Navarre and Aragon, the instability of the Umayyad dynasty led to it being toppled by the Abbasids and the last surviving Umayyad Abdul Rahman fleeing to Cordoba and establishing an independent emirate. Following the Battle of Valdejunquera, which was the greatest defeat inflicted on the Christians, the Caliphate of Cordoba was established.

Around the time that marks the beginning of the High Middle Ages, the various realms that formed the Catholic north began to take shape, this was the starting point upon which the eventually six most representative nations of the Iberian Peninsula would appear: the Castilians, based around the Kingdom of Castille; the Galeo-leonese, members of the Kingdom of Leon; the Catalans, inhabitants of the Kingdom of Aragon; the Basque, living in the Kingdom of Navarra; the Andalusian, ruling the Kingdom of Granada; and, the Portuguese, natives of the Kingdom of Portugal. It must be noted however that because of the unions (yes, unions) between Castille and Leon shortened the term from six to Five Kingdoms, four Christian and one Muslim. One of the misconceptions of the Reconquista is that it was a purely Spanish business while the truth was that all of the listed realms participated in the fight against the Muslim dukes in the Iberian soil with some finishing their own fight long before the fall of Granada like Portugal or Aragon.

For the most part, the previous Muslim states that governed Al-Andalus were relatively tolerant towards it's Christian and Jewish minorities, so long as they accepted secondary status as dhimmis and paid a head-tax. This changed with the Almohad movement started by Ibn Tumart, who was noted for being particularly ultra-conservative and puritanical to the point he was expelled from Mecca after performing his Hajj and every other city he visited because he annoyed locals that much with his preaching about how they deviated from Islam. Nevertheless, they also earned him a very devoted following. When he confronted the Almoravids, he regarded them "insufficiently Islamic" despite them being puritanical themselves. Tumart started a jihad against the Almoravids by proclaiming himself the Mahdi (the Islamic Messiah) his with successors eventually toppling them.

The Almohad Caliphate managed to become very powerful in short time and had more central control over the Iberian Peninsula than their predecessors, fielded an massive force and managed to defeat the Christian kingdoms. Sensing that the Northern Iberia could fall, Pope Innocent III called for a crusade against the Almohads, uniting the squabbling kingdoms of Portugal, Aragon and Navarres, the Knights Templar, the Order of Santiago and several European volunteers to push back against their enemy that were still many times their number. This was the Battle of Las Navas de Tolosa, which resulted in a decisive victory and broke the Almohads not only in Iberia, but in North Africa too since their power diminished after this massive loss.

The Fall of Granada

The fall of the Almohad caliphate incidentally lead to a decline in Muslim power through out the Iberian Peninsula. Having broken up again into several Taifas, the Muslims were fractured while the Christians were more unified which allowed them to control their territory bit by bit. Portugal completed the Reconquista by seizing the region of Algarves, while the kingdom of Castille and Aragon conquered the Emirate of Granada, the last remaining Islamic kingdom in the Iberian Peninsula. It was seen as a counterbalance to The Fall of Constantinople a few decades prior.

Nevertheless, the Reconquista's impact cannot be understated: it was one of the most successful Crusades - more so than the ones in the Middle-East - and the Iberian nations were the first ones to fund explorers searching for alternate routes to India, starting the Age of Discoveries and subsequent colonization of The Americas

Works that take place in this period