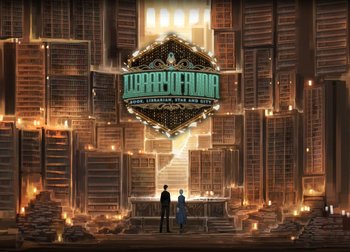 Book, Librarian, Star and City
May you find your book in this place.
Advertisement:

Library Of Ruina is a Deck Building Turn-Based Strategy RPG Simulation Game developed and published by South Korean independent video game studio Project Moon. It was released on Steam Early Access on May 15, 2020. The game is a direct sequel to Lobotomy Corporation and as such reveals important plot points about the game's main plot and ending.

The game's story takes the form of a Visual Novel and follows directly from the ending of the previous game. Roland, a low-grade Fixer from a location known only as the City, one day finds himself transported into the foyer of the titular Library, a mysterious location filled with books on any subject one could think of. He soon finds himself in the company of the Head Librarian Angela, and after a brief scuffle, she decides to spare him and recruits him to be her guide on the outside world. Angela has a strange way of going about it though, as she sends out calling cards called Invitations to ask people to come to the Library and gives them a choice in whether they accept or decline. If the guests accept, they must survive mortal combat against the Librarians that guard the building; if they win, they can take any book they want. If they lose, they will become a book themselves. All of this is in service to Angela's true goal — gaining the one "perfect" book that can make her into a human.

As Roland and Angela fight to add more and more books to the Library's shelves, a winding plot unfolds that explores multiple parts of the City and its people. From the lowly gang members and various psychos that prowl the streets, to the Fixers of varying strengths and moralities, all the way to the highest echelons of society, the Library picks a fight with stronger and stronger forces as it rises from a mere backalley rumor to the City's top position of infamy. All the while, a war brews over the land occupied by the Library, and a figure known as The Blue Reverberation puts into motion a strange plot that will shake the City, and its people, to their very core.

The game's battle system takes the form of a Turn-Based duel with your team of Librarians against the invading Guests. At the beginning of each turn, both teams roll Speed Dice, which determines the order of attack — characters with more than one Speed Dice can take as many actions as they have Speed Dice. The Librarians and Guests then pick and choose combat cards called "Pages", apply them to their respective Speed Dice, and then both teams engage in combat with the Speed Dice determining the order in which combat plays out. Status Effects, special defensive cards and the Light cost of each card add depth to the combat system and incentivize the player to build a strong, cohesive deck for their Librarians to use.

An additional layer of depth lies within the Emotion Point system. As the Librarians and Guests clash with each other, they will generate a supply of Emotion Points which will raise the Emotion Level of their side. For the Librarians, their Light supply will be refilled and they will gain access to powerful buff cards called "Abnormality Pages", based off the Abnormality monsters from the previous game. Each floor of the Library has their own unique Abnormality Pages which center around a specific playstyle, such as the Floor of Technological Science's Glass Cannon approach, or the Floor of Art's Regenerating Health intricacies. For the Guests, higher Emotion Levels will cause them to drop more Books when defeated, which can be consumed after the battle to gain the Pages the Guests themselves used. All of this adds up to a game with lots of playstyles and viable approaches to battle, with hundreds of Pages to collect, plenty of Abnormality Pages to play with, and dozens upon dozens of potential decks to be built.

The game has been fully released as of August 2021. Later updates on PC also added an "Invitation Editor" allowing users to create their own custom battles for the game.

The game also has a novel tie-in, The Distortion Detective, which is set concurrently to the events of the game, but from the perspective of a Fixer outside of the Library. The series has been cancelled, but ProjectMoon has announced that they intend to develop a full-scale game based on the series following their next game's release. In November 2021, ProjectMoon announced a comic taking place in the game's setting, Leviathan. Since June 2022, said comic has since been adapted into an illustrated webnovel due to management issues and concerns over the artist's health.

Has an upcoming winter 2022 sequel of its own, Limbus Company.

May you find your tropes in this place: