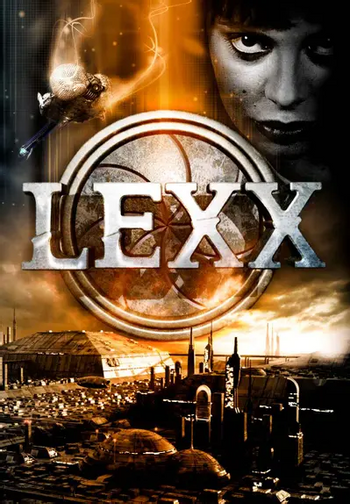 Lexx (known in its first season in America as Tales from a Parallel Universe), is a German-Canadian co-produced Space Opera. It ran on the Global Television Network and later the Sci-Fi Channel from 1997-2002.

We open in the so-called "Light Universe", which is ruled by His Divine Shadow. He claims to protect the Light Universe from the evils of the "Dark Universe", but it's later revealed that the Dark Universe is our universe. He converts a giant insect into an unstoppable planet-killer called the Lexx. This thing is like a '69 Mustang which he's been restoring, and he can't wait to use it. Then a quartet of idiots somehow steal the deadliest weapon ever made from the most evil being to ever exist, and now must run for their lives.

The show takes Sigmund Freud's axiom that the sex drive and the death drive are the two main forces controlling human nature: Stanley Tweedle, security guard (Level 4, the lowest), Zev Bellringer of 3BK, a woman who was forcibly converted into a love slave for failing to perform her wifely duties (she's got the looks and the libido, but none of the mental imprinting), Kai, an undead assassin, and 790, a robot head (that got the mental conditioning intended for Zev) zoom around the galaxy looking to get laid. They never learn lessons and blow up every planet they visit. Rinse and repeat. Take the fatalism of Wagnerian opera, the budget of a Sega CD game, and the logic (and sometimes acting) of softcore porn, and that's Lexx.

The show originated as a series of four TV movies, each one featuring a notable guest star: Barry Bostwick, Tim Curry, Rutger Hauer, and Malcolm McDowell. The second season was spent wandering the two universes.

As a cost-saving measure and an opportunity for long-form storytelling, the Lexx spent the last two seasons parked mostly in orbit. Season Three revolved around a new binary system: Fire, a barren wasteland, and Water, a lush paradise. It also introduced Prince, a primeval force of chaos in the shape of Nigel Bennett (of Forever Knight fame). The fourth and final season planted Lexx in present day Earth—as seen through the lens of Paul Verhoeven and David Cronenberg while tripping on LSD. It satirically skewered modern culture, with targets including militia fanatics, pretentious actors, politicians, internet porn, Reality Television, and Kaiju films.

The show was often described as the anti-Star Trek, and, fittingly, you could say the show's five-year mission was to explore strange new worlds and blow them up, seek out the sleaziest and seediest new life and civilization, and to boldly come where no man has come before.

"Looking for some strange? Have some Lexx."