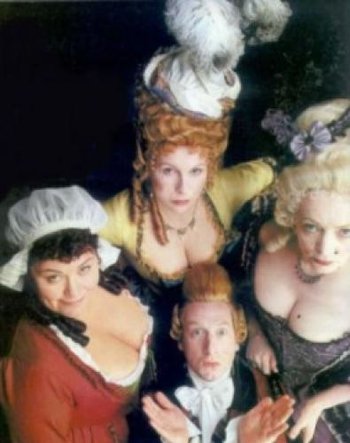 Let Them Eat Cake was a 1999 British comedy series set in 1782 in the Palace of Versailles, as a helpful title card points out every episode, during the reign of Louis XVI and Marie Antoinette. Lasting a grand total of one six-episode series in 1999, it starred Jennifer Saunders as the amoral Colombine, Comtesse de Vache, with Dawn French and Adrian Scarborough as her maid Lisette and foppish manservant Bouffant, respectively.

Idle and rich, Colombine spends her days cataloging the debaucheries of her fellow palace-mates for blackmail purposes, as she has not herself had the chance to debauch as of late and is always looking for a chance to get in good with the royals. Lisette's job is to keep the Comtesse going all hours of the day, only stepping out to have her own debaucherous relations with various men, noble, soldier, and peasant. Meanwhile, Bouffant's hard work keeps her at the forefront of gaudy French fashion, whether it be a dress or a large battleship-adorned wig appropriate for viewing public royal copulation. Unfortunately, those outside the palace walls are already starting to revolt.