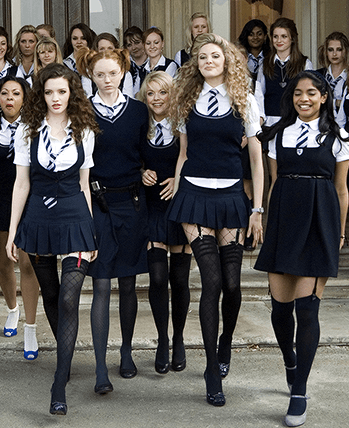 "Catholic school girls. The uniform's what does it for me."
— Banky Edwards, Chasing Amy
Advertisement:

The belief that girls who attend Roman Catholic schools are sexy and/or promiscuous by their very nature. (After all, how else do you end up with all those Naughty Nuns?) Any accurate resemblance to reality is purely accidental.

As Roman Catholicism teaches that sex is to be strictly reserved as part of marriage, it is widely believed that children in Catholic families or attending Catholic schools are not taught about sexuality in a way that promotes an informed understanding of themselves, their bodies, or sexuality in general.

This feeds into an idea that, since Catholic girls supposedly know nothing about these things, they would therefore be a lot easier to seduce than more "enlightened" girls who "know better". Alternatively, even those who know differently may feel that a Catholic girl striving to be innocent is a desirable virgin, making for a greater challenge to seduce, and thus a "greater prize" if she can be wooed into the bedroom.

There's also the notion (sometimes Truth in Television but usually just wishful thinking, given the fetish-fantasy nature of the trope) that a seemingly chaste schoolgirl may only be going through the motions of chastity and religiosity for the benefit of parents, teachers, and clergy, similarly to a Seemingly-Wholesome '50s Girl, and is just itching for a chance to reveal her less-than-holy side the moment no one's looking. All of that repression leads to a simmering cauldron of typical teenage hormones just looking for a chance to boil over in a plethora of exciting ways in an attempt to rebel.

This trope is slowly becoming discredited, since many real Catholic schools have changed their uniforms to unisex khakis and polo shirts, especially as more schools realize that what looks pure and innocent on a 9-year-old takes on a different context (whether intentional or not is irrelevant) when worn by a 16-year-old after the "summer growth spurt."