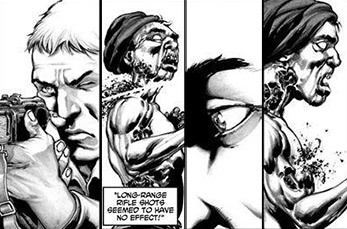 "The inability to recognize and avoid pain is what makes the walking dead so formidable. Wounds will not be noticed and, therefore, will not deter an attack. Even if a zombie's body is severely damaged, it will continue to attack until nothing remains."
— The Zombie Survival Guide
Advertisement:

When the dead walk the Earth, many of us will probably just aim for the head or burn them. However, sometimes that isn't enough. For some undead characters, they gain an odd (but sometimes limited) form of Nigh-Invulnerability, where because they do not actually rely on most of their internal organs anymore, they can take damage that would instantly kill or incapacitate them if they were alive and just keep on coming. They can take a shotgun blast to the chest, get completely dismembered, or even be set on fire and burned into a skeletal crisp, and they will continue to move and try to attack you.

Unlike traditional Nigh-Invulnerability, the level of durability can be stronger or weaker depending on the work in question. Some interpretations will allow the undead to be slowed down or disabled altogether by removing all of their arms and legs, completely paralyzed by decapitation, or even killed instantly by a bullet or blow to the head as a sort of Achilles' Heel. Skeletons, however, tend to get different treatment, often being able to reassemble themselves after being "killed" in the same manner as Pulling Themselves Together, making this a Super-Trope. An intelligent undead character aware of this status may become a Fearless Undead.

See also Perpetual-Motion Monster. Like this trope, undead characters just seem to generate energy out of nowhere to keep going.