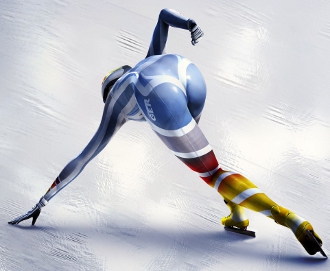 Maybe second place ain't that bad. At least there's a nice view.
"By the way, it's cool that it's red and all, but what pervert designed this suit? It's a bit revealing!"
— Asuka, Rebuild of Evangelion
Advertisement:

For some reason, sports in both Real Life and in fiction tend to feature quite an expanse of revealed flesh — or flesh not revealed, in artful ways. This trope is where Stripperific meets the sporting arena, where audiences are equally likely to tune in for the Fanservice and the actual sport itself.

This is a justified in situations where an outfit providing more coverage or concealment would be impractical in other ways. Sports such as gymnastics fall into the coverage without concealment category, as less form-fitting clothing would be restrictive, distracting, or get caught in the equipment while less coverage would expose the athletes to friction burns. In sports that prioritize the speed of the human body in motion, such as track and field, uniforms tend to provide minimal coverage and are cut to follow natural creases of the human body to avoid restriction and chafing. Conversely, sports that involve speeds high enough to make air resistance a factor such as speedskating tend to minimize the amount of exposed surface area to reduce drag. One of the few fanservice tropes that is often applied equally to both sexes.