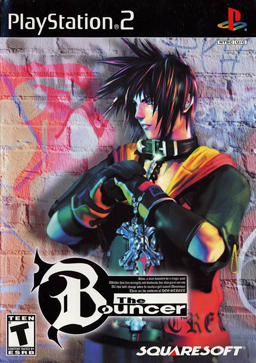 Wait a second, where's Kou and Volt?
"Pardon my past discourtesies… I will forget the past… I no longer care about the indignation I have suffered!"
— Dauragon Mikado, as he prepares to fight Kou, Sion, and Volt on board the Galeos.
Advertisement:

It's going to be a long night for a bar so empty.

The Bouncer focuses on one really bad night at a bar called Fate. Despite being a slow place, it has three bouncers: Sion Barzahd, Koh Leifoh, and Volt Kreuger. On the night of Sion's one-year anniversary as a bouncer, a team of Ninjas busts in, out to kidnap their friend, Dominique Cross. When they make off with her, the three chase after her, to have a showdown that the bouncers find is way out of their league.

It was developed by Square, and launched two days before the Christmas of 2000 for the then-new PlayStation 2. The game did not do nearly as well as they hoped, although main character Sion seemingly lives on through his visual Expy, Sora.

The game has somewhat of a cult status with PS2 gamers due to the story and the characters, even though it didn't sell enough to be in the top 10 games sold in the early 2000s.