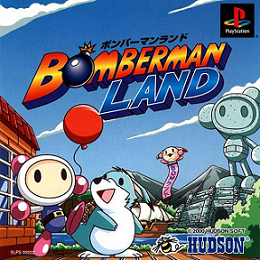 The first game for the PlayStation
Advertisement:

Bomberman Land is the Bomberman franchise's personal series of minigame-centric Party Games. The first three games were only released in Japan, then the series began being released internationally with Bomberman Land Touch!.

The story for each game is the same at its core: Shiro Bom / Cheerful White and his friends all travel to a theme park and take part in its attractions. Unlike games such as Mario Party which use a Monopoly-styled board game layout, the theme park is an explorable overworld, and the player must complete the park's various minigames in order to unlock more of the park to explore.

Games in this series: