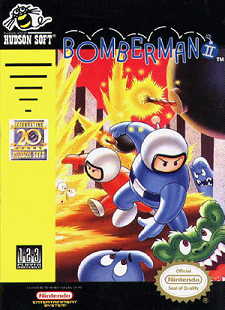 Bomberman II is a 1991 installment in the Bomberman franchise, and a direct sequel to the 1985 Video Game also released for NES.

The young miner White Bomberman has been framed for a robbery by his rival Black Bomberman and been thrown in jail. The player must escape the cell, find Black Bomberman, and bring him to justice. Gameplay is the classic Bomberman formula, complete with square, grid-based arena and balloon-esque enemies.

This is the second of three games to feature Black Bomberman as the main antagonist, following 1990's Bomberman and proceeding to 1992's Bomberman '93, both for TurboGrafx-16. It is also the third title overall to include multiplayer, after Bomber Boy and the aforementioned Bomberman the previous year.

Not to confuse with Custom Battler Bomberman, which was released in Europe as Bomberman 2 (see Market-Based Title).