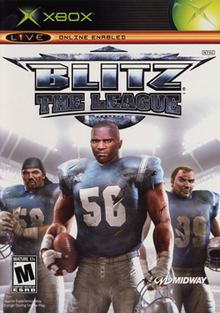 The year is 2004, and Midway Games has a problem. Last year's edition of their popular NFL Blitz series, NFL Blitz PRO, was the most toned-down, realistic Blitz yet thanks to National Football League lobbyists forcing them to dial back the games' signature violence, and the result was a flop, both commercially and critically. To make things worse, their rivals over at Electronic Arts just signed an exclusive license with the NFL, making Madden NFL (and NFL Street, until that died out a few years later) the only game in town as far as American Football video games went. So now, Midway was faced with a choice: take a premature axe to their iconic football series...or go their own way, start their own league, and create a version of football so brutal that it made the NFL's old complaints look absurd.

The result was Blitz: The League, originally released in fall 2005 for the PlayStation 2 and Xbox, with Xbox 360 and PlayStation Portable ports the following year. Not content with merely returning Blitz to its arcade roots, The League reveled in Rated M for Manly excess, with gameplay that encouraged dirty hits, steroid use, gambling, and every other seedy vice the NFL would never want to be part of its image. This all came packaged with an entire fictional league called, well, The League, complete with a promotion-relegation system like soccer leagues outside the U.S. use, its own detailed century-long backstory, and 17 teams, each with their own outlandish star players. This all paved the way for a single-player story mode written by the team behind ESPN's controversial football drama Playmakers, where the 18th team of the league, after a humiliating season that ends with them getting sent down to the lowest division and their quarterback retired at the hands of the New York Nightmare's star linebacker Quentin Sands—played by his real-life inspiration, NFL Hall of Famer Lawrence Taylor— go through a total overhaul in an attempt to finally win a championship and get their revenge.

The game was successful enough to get a 2008 sequel, appropriately named Blitz: The League II, with its own storyline set three years later. This time, you play as Kid Franchise, the League's first two-way player in decades, as he leads his newly-created hometown team up through the ranks and battles the League's corrupt commissioner, who wants his pet expansion team, the LA Riot, to be the next big dynasty at any cost.

However, hopes of a third entry in the series quickly hit a brick wall in early 2009, as Midway filed for bankruptcy and saw its assets bought off one by one. With EA now holding the license to the Blitz name, if not necessarily The League's universe, it's unclear if or when the series will ever come back.

The Blitz: The League games feature examples of the following tropes: