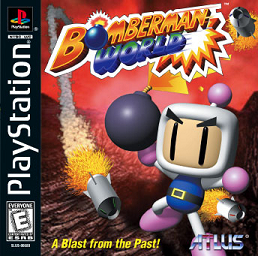 Bomberman World is a 1998 installment in the Bomberman franchise, and the first to be released on the PlayStation. It retains the classic series formula, although this time the player only needs to collect crystals to access the exit as opposed to defeating all of the enemies. The game is also viewed isometrically, giving the illusion of 3D.

Prior to the events of the game, the Dark Force Bombers (Earth Bomber, Cyclone Bomber, Fire Bomber, and Aqua Bomber) were sealed in Blue Crystals, buried on different planets. In the present, Buggler suddenly returns and revives the Dark Force Bombers, enhancing their powers and sending them out to conquer the four worlds. It's up to Bomberman to collect the crystal shards and stop them. The game received a Japan only strategy JRPG prequel called Bomberman Wars, which elaborated on the backstory.

There was a 1992 arcade game also called Bomberman World, which is a follow-up to the 1991 Bomberman arcade game, but is otherwise unrelated to this game.