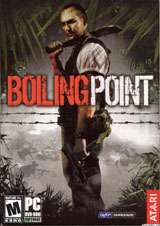 Xenus: Boiling Point (known as Boiling Point: Road to Hell outside of Russia) is an Open-ended First-Person Shooter developed by the Ukrainian game studio Deep Shadows and published by Atari. It was perhaps the first of its genre, predating both Stalker: Shadow of Chernobyl and Far Cry 2. In fact Deep Shadows was comprised of defectors from GSC Gameworld (the developers of S.T.A.L.K.E.R.) who were disillusioned with that game as it was in Development Hell at that point. Extremely polarizing game, mostly because the game was released with literally hundreds of bugs, though almost all of them were eventually fixed by patches.

The game plays like Deus Ex as a Wide-Open Sandbox, having a skill system, a stealth system, and a lot of time spent talking to people.

The plot follows one Saul Myers (whose character model is based on Arnold Vosloo, though the resemblance in actual game graphics is... somewhat questionable), a veteran of the French Foreign Legion living abroad in Paris. Myers' daughter, Lisa, is a globetrotting journalist. Lisa runs afoul of and is kidnapped by persons unknown while working in the fictional, troubled South American nation of Realia. News of this is quickly relayed to Myers, who hastily departs for Realia, where he must tangle with local politics and the criminal underworld while trying to track down his missing daughter.

The game has two spiritual successors, White Gold: War in Paradise and The Precursors. White Gold was released on Steam as Xenus II: White Gold in December 2016.