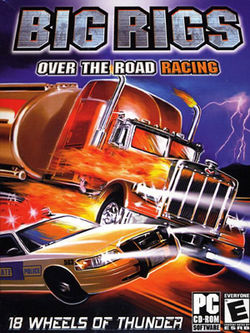 Obvious Beta: The Game.
"YOU'RE WINNER !"
—The victory screen
Advertisement:

Big Rigs: Over the Road Racing is a "racing" "game" for the PC, developed and released by Stellar Stone in 2003.

The objective is to race your selected semi-trailer truck to the finish line before your opponent, while passing through each checkpoint on the track. While the game is sufficiently functional to allow the player to drive the truck, it does not contain an AI to control the opponent's truck, which negates the alleged "racing" aspect of the game.

Despite the stopwatch displayed in the corner of the racing screen, there is no further mechanism for tracking the player's race times, providing little motivation to reach the finish line in a timely manner. Physics and collision detection were likewise not implemented, so the player doesn't need to stick to the course, either. Your truck can drive up vertical cliffs, sink through bridges, go infinite speed in reverse and even leave the boundary of the map, all while your opponent sits there in silence, not moving an inch.

Given the above, there's no way to physically lose the "race"— either the player crosses the finish line and wins, or they get sick of the game and quit. See it for yourself.

Distinct from Euro Truck Simulator, which takes the basic premise of a Big Badass Rig driving game and takes it in a more playable direction.

This "game" provides examples of: