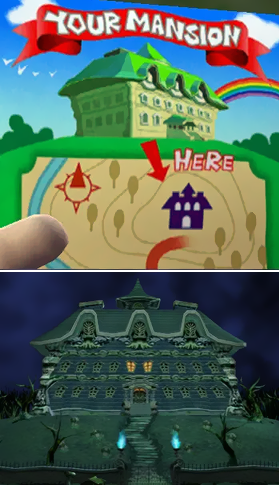 Sure, it's big enough, but look at the location!
"If that's the Happiness Hotel, I'd hate to see what the sad one looks like."
— Fozzie, The Great Muppet Caper
Advertisement:

Characters go on what they expect to be a wonderful vacation at a luxuriously extravagant hotel or resort. Upon arriving at their destination, they discover that the place is a dingy disaster. The brochure lied about... well, everything. The supposed 5-star "Ultra-Cool Inn" was merely a crumbling cottage filled with cobwebs and has roaches living inside the refrigerator.

Sometimes you'll see the characters holding up the advert, and then revealing the actual place behind it. The elements will correspond but will be very different. The swimming pool will be in the same place, but the real one will be dirty brown, with stink lines coming off it. The "claims" usually turn out to be Metaphorically True and the fine print prevents them from obtaining a refund, forcing the characters to suffer through the ordeal.

The place looked so much better in the commercial...

The place looked so much better in the commercial...