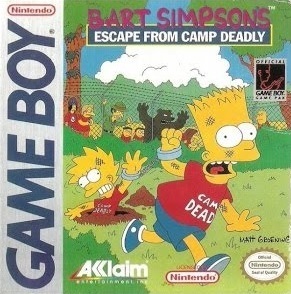 Bart Simpson's Escape From Camp Deadly is a 1991 Platform Game for the Game Boy, developed by Imagineering (creators of A Boy and His Blob, as well as the other Simpsons games) and published by Acclaim. Very loosely based on the classic Simpsons episode Kamp Krusty, the game centers around Bart and Lisa being shipped off to the notorious Camp Deadly for the summer, a horrible summer camp run by the tyrannical "Ironfist" Burns, who is determined to change the attitudes of the Simpsons children before camp is over... or they're never going to leave at all.

It's up to Bart to save both himself and his sister, and make sure Camp Deadly isn't going to ruin summer vacation for any other kids.