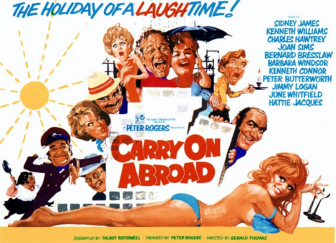 Bert: Hey, son. Hey! Is this for the dirty weekend?
Mr. Farquhar: This is the four-day trip to Elsbels, if that's what you mean.
Bert: Same difference, innit? Ha-hah!
— Bert Conway and Stuart Farquhar boarding the coach to the airport.
Advertisement:

Carry On Abroad is a 1972 film and the 24th in the Carry On series. It starred Sid James, Kenneth Williams, Charles Hawtrey (in his last film in the series), Joan Sims, Bernard Bresslaw, Barbara Windsor, Kenneth Connor, Peter Butterworth, Jimmy Logan, June Whitfield, and Hattie Jacques.

It takes place at Elsbels, an island in Spain. The Palace Hotel run by Pépé (Butterworth), his wife Floella (Jacques), and his son Giorgio (Ray Brooks) is open for business, even though five floors are yet to be built, and many interior walls and ceilings haven't been installed.

British tourist company Wundatours arrive, headed by Stuart Farquhar (Williams) and his assistant Moira Plunkett (Gail Grainger). Among the people on the trip are Bert Conway (Logan), a loud Scotsman hoping to find a one-night stand; Brother Bernard (Bresslaw), Brother Martin (Derek Francis) and several other monks on a religious vacation; Lily Dickey (Sally Geeson) and Marge Mace (Carol Hawkins), two women hoping to find a holiday romance; Rob Tweet (John Clive) and Nicholas Phipps (David Kernan) two men, Rob implied to be Nicholas' Gay Best Friend; pub owners Vic and Cora Flange (James and Sims); Sadie Tomkins (Windsor), a young woman who catches Vic's eye when she stops by his pub, prompting Cora to decide to join them on holiday to keep an eye on Vic; married couple Stanley and Evelyn Blunt (Connor and Whitfield), the former of whom is hoping to get his wife to relax and re-develop an interest in sex; and The Alcoholic Mummy's Boy Eustace Tuttle (Hawtrey).

For other Carry On films about vacations, see Carry On Cruising, Carry On Camping and Carry On Behind.

Stanley and Evelyn Blunt arrive at the coach that'll take them to their Spanish package holiday, although it seems poor Stanley isn't going to be getting much of a rest!

Stanley and Evelyn Blunt arrive at the coach that'll take them to their Spanish package holiday, although it seems poor Stanley isn't going to be getting much of a rest!