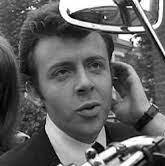 His acting career began on TV with his largest roles at the time being on Coronation Street and Taxi!. At the same time he would also play small roles in some films.

His rise to prominence came after starring in The Knack...and How to Get It, he followed this by starring in Cathy Come Home.

His film roles began to decline in The '70s, however he made up for this by releasing an album and narrating Mr. Benn.

In The '80s, he co-starred in Big Deal with Sharon Duce, and then with her again in Growing Pains.