Film / Carry On Behind 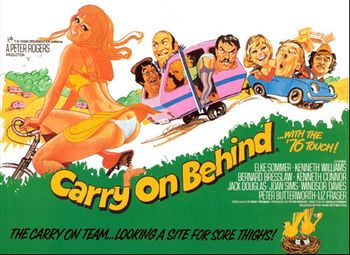 Barnes: Have a look at this!
Daphne: Well, lay it on the table so I can see it.
— An overheard conversation between Henry and Daphne Barnes over a game of poker.
Advertisement:

This was the fourth Carry On movie based on holidays and was the last critically-acclaimed "good" Carry On film of the 1970's. This is possibly because screenwriter Talbot Rothwell (who wrote most of the films - many being box-office smashes) had taken ill and unfit for work and was replaced with different writers per movie for the rest of the series. This film was instead written by Dave Freeman, who was also a writer for Sid James' sitcom Bless This House.

Like many of the holiday movies, Behind tells several subplots of ordinary folk that meet up at a holiday site. This time it's at Riverside Caravan Park, a field by some trees and a clubhouse, where it rains heavily and there are sinkholes... lots of sinkholes. It's owned by Major Leep (Connor), with the help of Henry Barnes (Butterworth), a dirty odd-jobs man.

Some of the visitors include an archaeologist named Professor Roland Crump (Williams), who brings along foreign colleague Professor Anna Vooshka (Sommer) to excavate nearby, which causes a lot of havoc with the other residents; a butcher named Fred Ramsden (Davies) and his electrician friend Ernie Bragg (Douglas) who hope to find some crumpet as their wives Sylvia and Vera (Fraser and Patricia Franklin) won't be coming with them; Carol and Sandra (Sherrie Hewson and Carol Hawkins), two dolly birds who catch Fred and Ernie's attention; Arthur Upmore (Bresslaw), whose holiday is spoilt as he reluctantly brings his wife Linda's (Rowlands) mother, Daphne (Sims), and her pet - a talking mynah bird (Gerald Thomas); and Joe and Norma Baxter (Ian Lavender and Adrienne Posta), a couple with an enormous dog named Ollie.

For other Carry On holiday films, see Carry On Cruising, Carry On Camping and Carry On Abroad.