Series / Doctor in the House 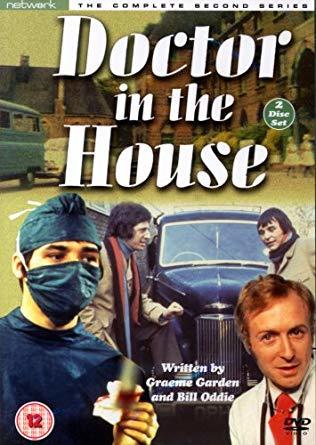 Doctor in the House is the collective name for a series of seven British sitcoms about the misadventures of a group of medical students, later qualified doctors, at the fictional St. Swithin's Hospital in London. The Doctor franchise started as a series of books by Richard Gordon, several of which were adapted into films in the 1950s and 1960s variously starring Dirk Bogarde and Leslie Phillips in the lead roles, and several stories from which were adapted into two radio series entitled Doctor in the House and Doctor at Large in 1968-69 starring Richard Briers. The series finally made the leap to television in 1969, and remained a fixture of British screens for most of the following decade.

Doctor in the House was the first series in the TV franchise, airing on London Weekend Television for two series in 1969 and 1970. It starred Barry Evans as doctor's son Michael Upton, eager to follow in his father's footsteps at the same hospital at which his father trained. His fellow students included self-styled comic Duncan Waring (Robin Nedwell), suave upper-class charmer Dick Stuart-Clark (Geoffrey Davies), academic struggler Paul Collier (George Layton), and hard-drinking rugby players Dave Briddock (Simon Cuff) and Huw Evans (Martin Shaw); in the second series, Evans was replaced by Irish boxer Danny Hooley (Jonathan Lynn). The students lived in fear of the autocratic yet brilliant surgeon Professor Geoffrey Loftus (Ernest Clark), who had no patience for their pranks or debauchery.

The students graduated from St. Swithin's at the end of Doctor in the House, so Doctor at Large, which followed in 1971, found Upton, Stuart-Clark, and Collier as newly qualified doctors (Nedwell left to join the cast of The Lovers, so Waring was Put on a Bus, as were Briddock, Evans, and Hooley) trying to obtain gainful employment. The series also introduced the grovelling, uptight Lawrence Bingham (Richard O'Sullivan), a highly competent yet snobbish and humourless doctor who was often on the receiving end of pranks by the more laid-back main trio. Loftus was absent for most of the series, but returned just over halfway through, as determined as ever to squash the doctors' more irresponsible behaviour.

The increasingly unreliable Barry Evans was let go after Doctor at Large, so Robin Nedwell was brought back as Duncan Waring to be the central character of Doctor in Charge, which aired for two series in 1972 and 1973. Waring, Stuart-Clark, Collier, and Bingham were now established doctors on Loftus' firm at St. Swithin's: Waring and Bingham as surgeons, Stuart-Clark as an anaesthetist (and more likely to fall asleep in the operating theatre than his patients), and Collier as a radiologist. A notable story arc from the first series saw Loftus put forth for a knighthood; the first series finale centred on the hijinks involved in getting him to Buckingham Palace to become Sir Geoffrey Loftus.

George Layton then left the franchise to star in It Ain't Half Hot, Mum, while Richard O'Sullivan took the lead role in Man About the House, so in the next series from 1974, Doctor at Sea, the central cast was down to Waring and Stuart-Clark, with Ernest Clark appearing as Sir Geoffrey's twin brother, Captain Norman Loftus. Having fallen out with Sir Geoffrey, Waring and Stuart-Clark got jobs on the cruise ship MS Begonia as ship's surgeons, but were far more interested in drinking and pursuing the female passengers than in actually practising medicine.

Waring and Stuart-Clark returned to dry land and St. Swithin's for Doctor on the Go, which aired for two series in 1975 and 1977. Still under Loftus' thumb, they found new allies in Scottish physician Andy Mackenzie (John Kane), bright surgeon Kate Wright (Jacqui-Ann Carr), and Upper-Class Twit James Gascoigne (Andrew Knox). The series more or less picked up where Doctor in Charge had left off, with Waring and Stuart-Clark trying to enjoy themselves and avoid the worst of Sir Geoffrey's wrath.

The series made not just a Channel Hop but a country hop in 1979, with Doctor Down Under airing on Australia's Seven Network (and back in Britain on ITV in 1980). Waring was now at St. Barnabas' Hospital in Sydney, with Stuart-Clark following in the first episode, both of them under the disapproving eye of surgeon Professor Norman Beaumont (Frank Wilson), and competing with the toadying Dr. Maurice Griffin (John Derum). Waring and Stuart-Clark were still drinkers and skirt-chasers, never shy about turning on their English charm around the Australian nurses.

The franchise made one final return to the small screen (and one final Channel Hop) in 1991 with Doctor at the Top, which aired for seven episodes on The BBC. Waring and Stuart-Clark were back at St. Swithin's, but were now firmly part of the establishment rather than rebelling against it, with Waring now married to Loftus' daughter Geraldine and father to five daughters, while Stuart-Clark had succeeded Sir Geoffrey as Professor of Surgery, and a returning Paul Collier divided his time between the hospital and a regular television engagement. The position of resident suck-up was now taken by Dr. Lionel Snell (Roger Sloman).

The writers for Doctor in the House, Doctor at Large, and Doctor in Charge included Monty Python's Graham Chapman and John Cleese, Barry Cryer, and The Goodies' Graeme Garden and Bill Oddie; the later series' writers included former cast members Jonathan Lynn and George Layton. Though the series were comedies first and foremost, due attention was paid to getting the medical details as close to correct as the rules of comedy would allow (Chapman and Garden had both graduated in medicine from Emmanuel College, Cambridge, and Garden and Oddie later joked that they divided their scripts so that Garden would write the medical scenes and Oddie would write the gags).