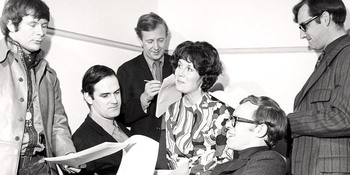 I'm Sorry I'll Read That Again was a popular BBC Sketch Comedy show which ran between 1965 and 1973, with a one-off "25th anniversary" show in 1989. It was something of a spiritual successor to The Goon Show, featuring numerous awful puns, funny voices and bizarre situations. The program originated from a broadcast of the 1963 Cambridge Circus revue, followed by three preparatory shows in April 1964, which were followed by the first series proper a year and a half later.

The cast, all Cambridge alums, included Tim Brooke-Taylor, Graeme Garden and Bill Oddie, who later went on to create The Goodies, and John Cleese, who, along with occasional writers Eric Idle and Graham Chapman, later went on to form Monty Python. Also in the cast were Jo Kendall and David Hatch. The early series featured occasional appearances by producer Humphrey Barclay (the original director of Cambridge Circus), but these ended after Barclay handed the reins of production to Hatch.

The format of the show was rather slapdash in the beginning, but eventually was streamlined into a Cold Opening sketch followed by the tongue-in-cheek opening announcements, followed by two or three unrelated sketches, a (usually) comic song by Bill Oddie, and then the extended central sketch of the week, usually an Affectionate Parody of either a specific film, book, or play, or just a genre.

I'm Sorry I'll Read That Again was responsible for the creation of I'm Sorry I Haven't a Clue a few years later.