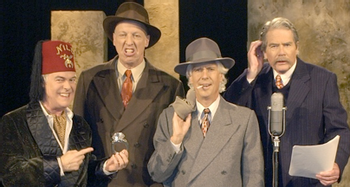 The Firesign Theatre (sometimes credited as The Firesign Theater) is an American comedy group; its members are (left to right) Philip Proctor, the late Peter Bergman, the late Phil Austin, and David Ossman. Their albums parody the usual radio and comedy album tropes.

After working briefly in local radio in the 1960s, they started releasing albums in 1968, debuting with Waiting for the Electrician or Someone Like Him and followed in successive years by How Can You Be in Two Places at Once When You're Not Anywhere at All?; Don't Crush That Dwarf, Hand Me the Pliers; I Think We're All Bozos on This Bus and others. Their comedy was based around improvisation and surrealism, with a touch of social commentary buried deep below the surface. Many of their longer pieces seem to be set in a bizarre and somewhat darker Alternate Universe that still somehow manages to bear a direct relevance to our own.

They also made several movies, including J-Men Forever, and Nick Danger: The Case of the Missing Yolk. (A sequel to "The Further Adventures of Nick Danger" from the album How Can You Be in Two Places at Once When You're Not Anywhere at All?)

You can learn more about them at their website.

The Firesign Theatre is the Trope Namer for: