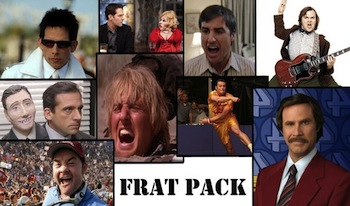 The Frat Pack is a colloquial fan term for a group of American actor/writer/director/all-round-movie-guys who specialize in comedy, originating in the early 2000s.

The name "Frat Pack" originates from one of their early defining works, Old School; not as a phrase dropped in-show but as a reference to their post-teen juvenile brand of comedy, while alluding to names like "Rat Pack" or "Brat Pack" given to other known groups of actors.

Notable non-collaborations (only one member) that embody the Frat Pack spirit include:

In addition to the above, there's several movies involving none of the core members, but retain their flavor thanks to the work of their collaborators: