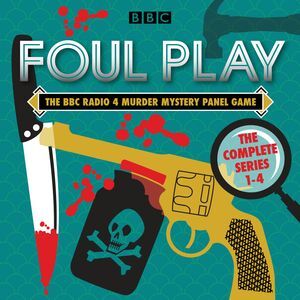 Foul Play was a BBC Radio 4 Panel Game for detective writers. Every week, two mystery novelists were invited to solve a murder mystery set by Simon Brett (also a mystery writer, as well as a well-known BBC producer).

The format of the show was that it would open with the panellists being introduced, then a skit in which Maria MacErline and Lee Simpson would narrate a scene ending in a mysterious death. The main section of the show was the cross-examination of three suspects (all voiced by MacErline and Simpson), in which the panellists would ask searching questions of the characters and the two actors would have to improvise their responses based on their knowledge of the scenario. Further information would be provided by police, forensics officers, and so on (again, all played by the same two actors). The panel would then be asked who they believed to be guilty, and a dramatised skit (the Foul Play Foul Playlet) would reveal if they were right by showing the actual murder.