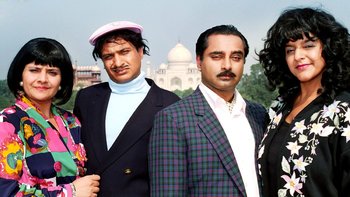 The main cast. Left to right - Nina Wadia, Kulvinder Ghir, Sanjeev Bhaskar, Meera Syal
1998-2001 Sketch Comedy show performed by British Indians Meera Syal, Sanjeev Bhaskar, Kulvinder Ghir and Nina Wadia. Most sketches were self-parody of British Asians and Asian culture, the reaction of white British people to Asians, or Indian-styled spoofs of western TV shows. Began as a radio series, then became a TV adaption on BBC1. A one off reunion special aired in 2014 with a second in 2015 as part of "Indian Season".
Advertisement:

The best remembered sketch from the show, which has won several awards, was "Going for an English" - a parody of the behaviour of drunken Brits in Indian restaurants.

Tropes used in the show include: