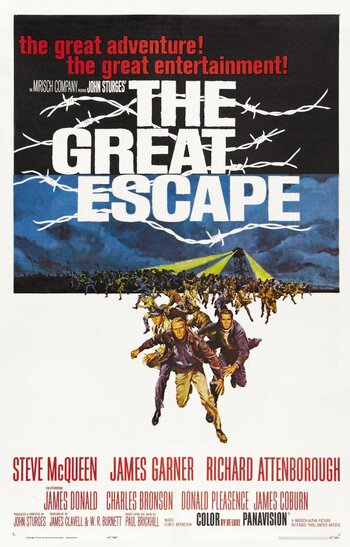 During the War, the Germans decided to put all Allied prisoners with a record of escaping into the same, supposedly escape-proof camp, Stalag Luft III. The prisoners promptly formed an escape committee, which began coordinating plans for a mass breakout. Tricksters forged important documents, suborned the guards, and acquired needed equipment, while others dug secret tunnels.

Months of planning and preparation culminated in a breakout attempt on the night of March 24, 1944. Seventy-six POWs (out of a planned 250) were able to escape the compound, but only three made it out of Germany. The rest were recaptured, several of them at the last moment. (The film climaxes with "Cooler King" Hilts, played by McQueen, leading the Germans on an iconic motorcycle chase, which ends with him trapped on barbed wire only inches from theoretical safety over the Swiss border— an entirely fictitious sequence.) Finally, most of the recaptured escapees were executed.

The film is largely accurate but meddling executives added a historical American character, and, for security reasons, omitted all mention of the help the escapees received from outside the camp. It also contains a series of continuity errors relating to the real-life segregation of American prisoners part-way through the tunnel digging; Hilts is given a couple of lines which are references to this (based on the book) while he, for no explained reason, is left there. The other American prisoners do not appear, so the whole thread is meaningless in context.

The film's theme music is very well known and a favourite of English football fans (especially when playing Germany). The story goes that the supporters' club band started playing it when England went a goal behind in a match against Italy; England staged a comeback and ended up winning, and the fans adopted the tune. It's one of Elmer Bernstein's epic masterpieces.

A video game based on the movie came out in 2003 for the PlayStation 2, PC and Xbox,. It managed to maintain a small cult following. There was also a 1986

from the 8-bit computer era which didn't really follow the movie plot, but has the distinction of being considered one of the best games for the ZX Spectrum.

Be warned. There are unmarked spoilers.

The Great Escape provides examples of the following tropes:

This article is dedicated to the fifty.