Working on the Chain Gang 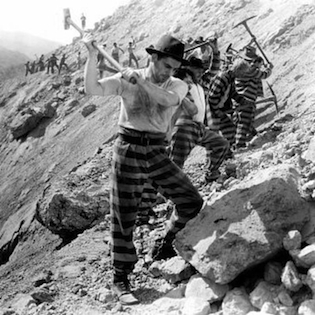 Droppin' the hammer here, boss!
"All day long they work so hard
Till the sun is goin' down
Workin' on the highways and byways
And wearing, wearing a frown
You hear them moanin' their lives away
Then you hear somebody say
'That's the sound of the men
Workin' on the chain gang'"
— Sam Cooke, "Chain Gang"
Advertisement:

A group of prisoners are shackled together, usually at the ankles, to perform acts of grueling physical labor, such as digging ditches, building or cleaning roads, and chipping stone, as a form of punishment.

Occasionally characters on a chain gang may attempt to make an escape while shackled together. This necessitates the escapees' efforts to find a means to break their shackles as well as cooperate with one another until they find a way to remove them — something that they usually learn "the hard way" after chained individuals try to run in opposite directions, possibly even running around different ends of a lamppost or similar structure which will immediately stop them dead in their tracks.

Working on the Chain Gang is Older Than Radio and is very much Truth in Television, although inmates are no longer chained together. The punishment became popular in the United States soon after the Civil War (1865) when slavery was abolished. The 13th Amendment to the Constitution banned involuntary servitude "except as a punishment for crime whereof the party shall have been duly convicted", leaving a legal loophole by which unpaid labor could still be exploited. African-Americans and out-of-staters were particularly vulnerable to being sentenced to hard labor for the state or local government.

Chain gang work remained commonplace in Southern US states up until the mid-1950s but has since become everything but a Dead Horse Trope; only one county in Arizona (Maricopa) and one in Florida (Wakulla) still make use of chain gangs, and the inmates aren't shackled together anymore. Nowadays, chain gangs mostly just exist in period pieces in media that involve prisoners in the early half of the 20th Century. "Community service" often involves similar tasks, but leave the people doing it looking indistinguishable from volunteers or paid public employees.

A Sub-Trope of Prisoner's Work. See Also: Chained Heat which, while usually occurring between only two characters—and not necessarily prisoners—bound to each other, can be expanded here to apply to even larger groups, if need be. In more fantastic films, this will be a feature of the Slave Galley. A Call-and-Response Song is often used to pass the time.