What Are You in For? 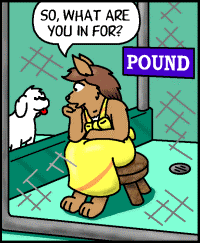 He said, "What were you arrested for, kid?" And I said, "Littering." And they all moved away from me on the bench there...
— "Alice's Restaurant"
Advertisement:

A stock line whenever a prison is involved, often with I Always Wanted to Say That thrown in for good measure. Either one of the main characters will ask this to somebody else, or one of the 'locals' will ask the main cast. If the question is posed to the main cast, we often won't hear the reply, since we already know what went before, and it's probably far too bizarre to explain, anyway. If asked to someone else, the answer is almost always truthful, no matter how vile the crime or criminal. (Lying never seems to be an option.)

Someone's crime will likely have involved pulling the tag off of a mattress or pillow. Bonus points if he's treated as the worst or scariest of the lot.

In Real Life (at least in UK prisons) they often already know — they read the daily courtcase roundup in the local paper so already know who's been sentenced for what and how long. In countries where this is not the case (Russia, for example), they still either already know or will soon be able to verify your words, using the rumor telegraph and illegally smuggling notes and letters from facility to facility.

Then he adds "And 'Creating a Nuisance'," and all the criminals move back and become friends with him.