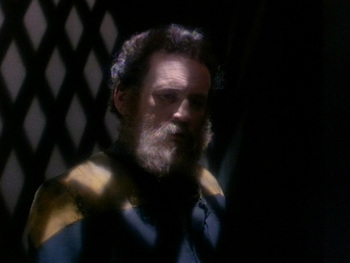 He already tried tunneling through the sewage pipe.note Captain Maxwell told him about it.
Advertisement:

In a Very Special Episode of "O'Brien Must Suffer", we open with a haggard man with long gray hair with his back to the camera, drawing a pattern in the sand. A wave of energy passes through and erases the pattern, and he starts drawing again. The camera angle changes, and we see that it's Chief O'Brien. His drawing is interrupted by a pair of guards entering the room, telling him that he has exceeded the necessary incarceration and must be released. They throw him out of his cell...

...and the scene changes to show him strapped to a table. O'Brien is incredulous when he sees Major Kira, looking the same as she did when he entered the prison, 20 years ago. The guards explain that he's only been in custody for a few hours, that his incarceration has been all in his mind, and that none of what just happened to him was real. "It's real to me, Major," he intones gravely. "It's real to me."

Captain Sisko explains the situation to O'Brien's wife, Keiko: O'Brien was on a team that visited Argrathi, but when he asked too many questions about Argrathi technology, the paranoid local authorities arrested him for espionage, and before his fellow Starfleet officers had even realized that he had gone missing, O'Brien had in short order been subjected to a very swift and likely unfair trial and found guilty. The Argrathi does not punish criminals with actual prison, however, but rather by implanting memories of being harshly incarcerated into their mind, and O'Brien was subjected to the said 20 years of this in the few hours it took Star Fleet to negotiate his release. Keiko asks if the memories are removable, and while Sisko reports that the Argrathi say it's impossible, Sisko reassures her that Dr. Bashir will try. Bashir interviews O'Brien on what he remembers. O'Brien had a cellmate, a man named Ee'char who had already been in the prison for six cycles prior to O'Brien's arrival, but he tells Bashir he was alone. After finishing his assessment, Bashir explains to Keiko that the memories O'Brien received aren't implanted false memories, but that O'Brien actually experienced everything that happened at an accelerated rate and so there isn't anything he can do without wiping everything else from his memory entirely. For a brief moment as he's being reunited with Keiko, he sees her as Ee'char.

O'Brien has a hard time readjusting: he unconsciously saves a portion of his dinner for later, a habit he picked up as a result of the rarity of the guards bringing food. Keiko finds him sleeping on the floor. He sees Ee'char walking through the station while playing darts in Quark's Bar. He's been temporarily demoted until he can get his technical faculties back. When Bashir goes to visit him, we find that he hasn't been seeing the counselor he's supposed to have been seeing three times a week. O'Brien doesn't want to talk about it, he just wants to forget what happened to him and becomes argumentative when Bashir presses the issue.

In a flashback, O'Brien gets into an argument with Ee'char, where he appears to be losing his sanity. After threatening Quark with violence when he doesn't deliver O'Brien's synthale as quickly as he'd like, he has another vision of Ee'char.

Sisko calls O'Brien into his office. Because of the argument with Bashir, the incident with Quark, and his continued refusal to see the counselor, he is relieved of duty and forced to see the counselor daily. O'Brien storms into Bashir's office. As Ee'char appears again, Bashir urges O'Brien to listen to him and accept his help. O'Brien doesn't want Bashir's help; he just wants to be left alone. As he walks through the promenade, the vision of Ee'char says, "You know sooner or later you'll have to tell someone about me." When he gets back to his quarters, Keiko tries to reason with him. His daughter Molly keeps trying to show O'Brien the drawing she made, which sets O'Brien off and makes him nearly hit her before he's stopped by Keiko. O'Brien is deeply shocked at what he nearly did to his daughter, and quickly leaves the apartment.

O'Brien hides in the cargo bay, where he is overcome with rage and smashes a container before opening a weapons locker and pointing a phaser at his neck. Bashir comes in and begins talking O'Brien down. O'Brien rationalizes that he's about to kill himself to protect Keiko and Molly and everyone else on the station from the man that he's become after 20 years of prison. Bashir reassures him that O'Brien is still a good, decent man, and O'Brien begins to open up to Bashir about Ee'char.

They were cellmates up until a week before O'Brien was released. The guards had gone longer without giving them food than they ever had before, and Ee'char mused that the guards might have forgotten about them. Later that night, O'Brien wakes to discover that Ee'char had been keeping a secret stash of food from O'Brien. In a rage, O'Brien attacks him and ends up killing him in the ensuing fight — only to find that the food has been divided into two portions, clearly indicating that Ee'char had meant for it to be for both of them. Compounding his guilt, the guards began feeding him again the next day. He had killed his friend for nothing.

"When we were growing up, they used to tell us... humanity had evolved, that mankind had outgrown hate and rage. But when it came down to it, when I had the chance to show, that no matter what anybody did to me, that I was still an evolved human being... I failed. I repaid kindness with blood. I was no better than an animal."

"No. No, no, no. An animal would've killed Ee'Char and never had a second thought, never shed a tear... But not you. You hate yourself. You hate yourself so much you think you deserve to die. The Argrathi did everything they could to strip you of your humanity and in the end, for one brief moment they succeeded. But you can't let that brief moment define your entire life. If you do, if you pull that trigger.. then the Argrathi will have won. They will have destroyed a good man. You cannot let that happen, my friend."

Bashir manages to get the phaser away from O'Brien as Ee'char fades away after gently smiling and telling O'Brien to "Be well."

We then see Bashir discussing the medicine he's prescribed O'Brien. It'll combat the hallucinations and the depression, but not the guilt. That will only take time. He returns to his quarters where he is warmly greeted by Molly.