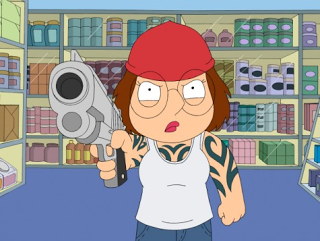 "Hands in the air, Goldman!"

Brian gets a job writing for a teen magazine — and finds his first story when Meg begins bonding with an escaped prisoner. And when Meg gets busted for harboring said escaped convict, she ends up in prison and is released later as a hardened thug.

The side-story is that Peter takes it into his head to enter a rodeo - and gets a whole lot more than he bargained for.