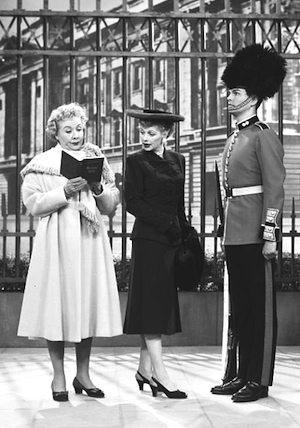 "Ethel, how do you say 'We're from Queens' in British?"
James Lipton: In that picture.. Kelly's grandfather invites the entire gang to Hawaii for summer holiday.
Dustin Diamond: Yes! The thing about that—
James Lipton: [interrupting] They expect a marvelous time at the beach, sans Mr. Belding. They arrive.. and discover Mr. Belding is there as well, don't they?
Dustin Diamond: Yes! Yes, he is! [cracking up] They didn't think he was gonna be there, but he is! That's the twist part! [laughs]
— Saturday Night Live sketch "Inside The Actor's Studio - Saved by the Bell: Hawaiian Style"

In an ongoing series that normally takes place in a few fixed locations, the Vacation Episode is a one-off episode where the characters leave their familiar grounds for a well-deserved rest. The vacation will invariably be set in a faraway and exotic location for maximum impact; given the higher costs of shooting on location, the episode will often be longer than usual, to make best use of the budget. A Special Guest or three might also be included. Expect some jokes at the expense of the city, country or people visited, targeting National Stereotypes, funny foreigners or a Culture Clash between our protagonists and the foreigners. When jokes are made at the expense of the protagonists' own nation or culture it's My Country Tis of Thee That I Sting.

May overlap with other types of episodes depending on the destination; for instance, a Vacation Episode to Hawaii will inevitably also be a Beach Episode. It may also turn out to be a Busman's Holiday. Occurs in lots of anime, often as a Beach Episode.

Also see Christmas Episode, Beach Episode, Road Trip Plot, Hot Springs Episode, Ski-Resort Episode, Camping Episode, and the Episodes index. Parent trope to Aloha, Hawaii! and Viva Las Vegas!. Add Horror and it becomes a Deadly Road Trip. While in another country the characters may be there for a mission, a task, a quest or a search. Watch for the Eiffel Tower Effect, where the background just so happens to show off an iconic local landmark.

If it turns out that the episode was just made as a pretext to send the cast and crew on vacation, see Vacation, Dear Boy. Also see the similar Vacation Films.