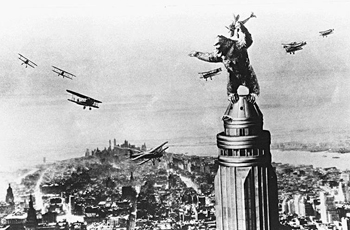 LET'S DO THIS.
Graydon: And then they're on the roof!
Clifford: Why are they on the roof?
Graydon: Because those are the rules!
— Spice World
Advertisement:

Included by Roger Ebert in his Book of Hollywood Clichés under the name Fallacy of the Climbing Villain.

A villain pursued by the good guys comes to a tall tower, steeple, stairwell, or building. He starts to climb. This would clearly lead to his getting trapped at the top, like a cat treed by a dog. An ordinary person in a state of panic may have done this on instinct, but for a criminal mastermind, it is unlikely. To do this after one sees what happens to climbing villains is also a clear case of Genre Blindness.

Ebert could just as easily have called this one The Fallacy of the Following Hero, as when a villain trees himself at the top of a building or other high place, instead of just staking out the bottom and waiting for him to come down, the hero has to go up after him. If it's a dangerous climb, the hero will probably drop his gun on the way up and have to fight the villain with his bare hands. Even if that doesn't happen, it will be a long, scary showdown, probably with a Literal Cliffhanger moment or two (see also Take My Hand!). May involve Climbing the Cliffs of Insanity. Generally, the villain falls to his death, but occasionally, the hero takes him alive or even saves his life, and the villain agrees to come quietly.

However, there are many ways this can be justified. The villain can have a Black Helicopter revved up and ready to leave (or arrive Just in Time in true Gunship Rescue fashion and sweep him away). A Plot Device may be locked in the fortified upper levels to turn the tide, and/or the villain expects the Mooks stationed throughout the levels to gun down the chasing hero.

Often preceded by a Stairwell Chase. Compare Ending by Ascending (when the climb itself is the climactic or final event rather than the prelude to it) and Journey to the Sky (when climbing or flying is simply the means to reach the skies, or a location therein).

During the 1980s, this trope was largely replaced by the Darkened Building Shootout and Executive Suite Fight.