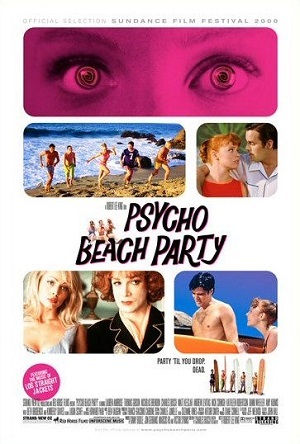 Psycho Beach Party is a 2000 comedy-horror film based on the off-Broadway play of the same name, directed by Robert Lee King. Charles Busch wrote both the original play and the screenplay. As the title suggests, Psycho Beach Party, set in 1962 Malibu Beach, is a parody of 1950s psychodramas, 1960s beach movies and 1970s slasher films.

After going to the cinema with her friend, Chicklet has a blackout when a murder occurs. Later, through a string of incidents, she ends up on a surfer beach and persuades the "surfer king", Kanaka, to teach her how to surf, joining the local gang of surfers. Getting caught in the mixed of a Love Triangle, more murders occur as the actress from the earlier film lives in a rumoured Haunted House where a family was murdered. As the police get closer to the murder, Chicklet worries whether her Split Personalities have anything to do with it...