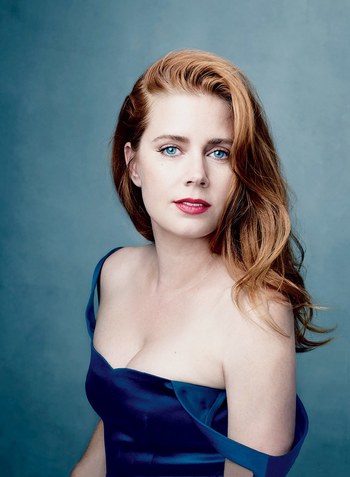 And David O. Russell said she's "so not a princess"....
"I didn't get into acting to have a moment, I got into it because of people who've inspired me, like Judi Dench, Holly Hunter and Jodie Foster."
Advertisement:

Amy Lou Adams is an American actress, born August 20, 1974 in Vicenza, Italy and relocated to Castle Rock, Colorado at age 8. She started her career as a theater actor. Her first film role was in the 1999 Black Comedy Drop Dead Gorgeous. She laboured for years in minor roles and guest spots on TV shows - she can be spotted in episodes of Charmed, The West Wing, Smallville, The Office, and even Buffy the Vampire Slayer (where she played Tara's racist cousin). Although Steven Spielberg hoped getting cast in Catch Me If You Can would spell big things for her, she actually did not work for a full year afterwards. When she was considering dropping out of acting, the script for an independent film called Junebug fell into her lap. Her role earned a surprising Best Supporting Actress nomination. But it was her next project that catapulted her to superstardom.

Enchanted, Disney's Affectionate Parody of themselves, cast Amy as Giselle - the Disney Princess forced into the real world. Her knack for playing The Cutie did lead to her being slightly typecast afterwards - usually as Nice Girl characters or a Manic Pixie Dream Girl. But working with David O. Russell helped - directing her in films like The Fighter and American Hustle that helped break her out of her 'nice girl' image and show audiences her range. She now has six Oscar nominations and no win yet (but give it time) and is currently part of the DC Extended Universe as Lois Lane.

Not to be confused with Isla Fishernote Their resemblance is a Casting Gag in Nocturnal Animals. Or, if you're reading this in New Zealand, the politician

She is married to actor Darren Le Gallo and they have a daughter together.