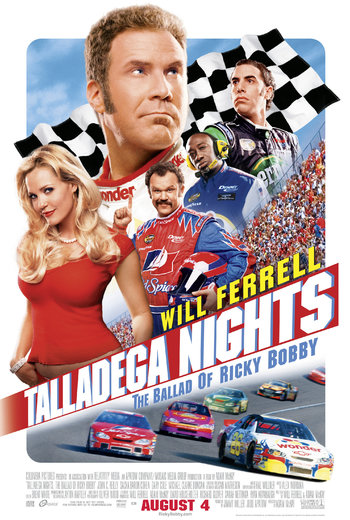 Best movie ever made - Ricky Bobby note  He's talking about Highlander
"If you ain't first, you're last."
Advertisement:

A 2006 comedy film parodying the world of NASCAR, directed by Adam McKay and starring Will Ferrell, John C. Reilly, Leslie Bibb, Gary Cole, Michael Clarke Duncan, and Sacha Baron Cohen, among others. It is a Judd Apatow production, and considered by many to be the spiritual successor to Anchorman: The Legend of Ron Burgundy, which was also an Apatow production directed by McKay.

Ricky Bobby (Ferrell) is a dim-witted yet charismatic NASCAR superstar who lives by the motto of his missing father Reese Bobby (Cole): "If you're not first, you're last." Helping him always secure the number one spot on the track is friend and teammate Cal Naughton, Jr. (Reilly). A few years after his initial rise to stardom, Bobby has a wealth of endorsements, is married to a babe named Carley (Bibb), and together they raise their two boys, Walker and Texas Ranger Bobby.

However, the good life Bobby has made for himself is put in danger when French Formula One racer Jean Girard (Cohen) makes a jump to NASCAR. After a humiliating loss puts Girard at the top of the NASCAR world, Bobby loses everything: his reputation, his endorsements, and even his wife (to Cal!). However, with the unorthodox training methods of Reese, and the support of his mother Lucy (Jane Lynch) and his assistant-turned-lover Susan (Amy Adams), Ricky motivates himself to return to the NASCAR scene in order to restore his reputation.

Talladega Nights: The Ballad of Ricky Bobby provides examples of:

Ricky Bobby cries out to Jesus, Jewish God, Allah, Tom Cruise (and his witchcraft), and Oprah Winfrey, anyone to help put out the invisible fire!

Ricky Bobby cries out to Jesus, Jewish God, Allah, Tom Cruise (and his witchcraft), and Oprah Winfrey, anyone to help put out the invisible fire!