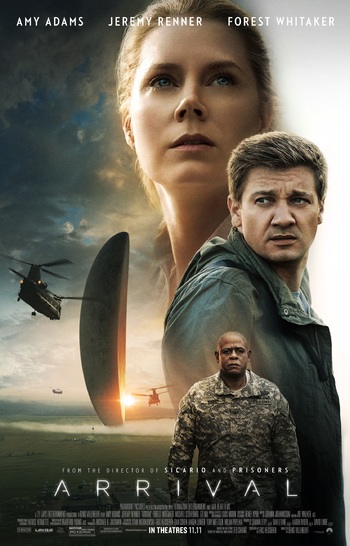 Why are they here?
I used to think this was the beginning of your story. Memory is a strange thing. It doesn't work like I thought it did. We are so bound by time, by its order. I remember moments in the middle, and this was the end. But now I'm not so sure I believe in beginnings and endings. There are days that define your story beyond your life. Like the day they arrived.
— Opening Monologue
Advertisement:

Arrival is a science fiction drama film directed by Denis Villeneuve and written by Eric Heisserer, based on the short story "Story of Your Life" by author Ted Chiang. The film stars Amy Adams, Jeremy Renner and Forest Whitaker.

In the film's prologue, linguistics professor Louise Banks (Adams) is caring for her daughter Hannah, who dies during adolescence from cancer. While Louise is at work lecturing, twelve mysterious extraterrestrial craft appear in various locations across the world. U.S. Army Colonel Weber (Whitaker) recruits her and physicist Ian Donnelly (Renner) to figure out how to communicate with the aliens and ask why they have come to Earth. They discover the ship is inhabited by two cephalopod-like "heptapods" (after their seven limbs), who communicate by forming ink into complex circular symbols. As Louise and the heptapods slowly learn each other's languages, a geopolitical drama plays out in the background as competing governments attempt to discover the aliens' purpose.

It was released on November 11, 2016 in IMAX. The trailer can be seen here

Not to be confused with 1996 sci-fi film The Arrival, or with Shaun Tan's graphic novel The Arrival.