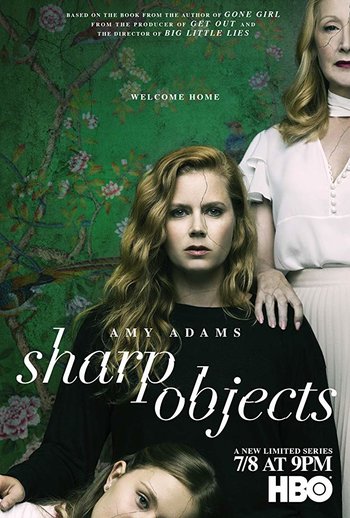 Sharp Objects is an HBO limited series that aired from July 8, 2018 to August 26, 2018, starring Amy Adams, Patricia Clarkson, Chris Messina, Eliza Scanlen, Matt Craven, Sophia Lillis and Henry Czerny, based on the novel of the same name by Gillian Flynn.

Camille Preaker (Adams) is a reporter from St. Louis who, shortly after a stay at a psych hospital, is assigned to cover the murders of two preteen girls from her hometown: Wind Gap, Missouri. Camille returns to Wind Gap to stay with her family — her abusive, cruel mother Adora (Clarkson), her stepfather Alan (Czerny) and her younger half-sister, Amma (Scanlen). The police chief, Vickery (Craven) resents Camille's presence, and a detective from Kansas City, Richard Willis (Messina), begins to grow closer to Camille.

While the series is partly about solving the murders, it is mainly focused on Camille and her mental health — Camille self-harms by cutting words into her body, and is still psychologically scarred from her younger sister's death when she was a teenager. In order to solve the murders and put to rest her demons, Camille must confront her past and her family.