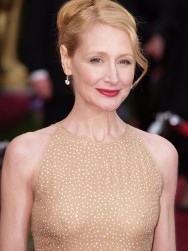 I go where I need to go. If I need to look glamorous or spiffy or young, or battling cancer, or a drugged-out and hippie type, it hopefully will be projected in my face. That's the beauty of acting: hopefully it comes through. It's not about hair and makeup, a different color of hair. It's about being malleable.
—Patricia Clarkson
Advertisement:

Patricia Davies Clarkson (born December 29, 1959) is an American actress who has been working in Hollywood since the '80s.

She is only rarely a leading lady, usually taking character parts, which have run the gamut from abusive mother Margaret White in Carrie (2002) to steadfast, supportive coach's wife Patti Brooks in Miracle. She made her critically-lauded debut in The Untouchables (1987) opposite Kevin Costner, but her breakthrough role didn't come until nine years later, as drug-addicted lesbian Greta in High Art (1998).