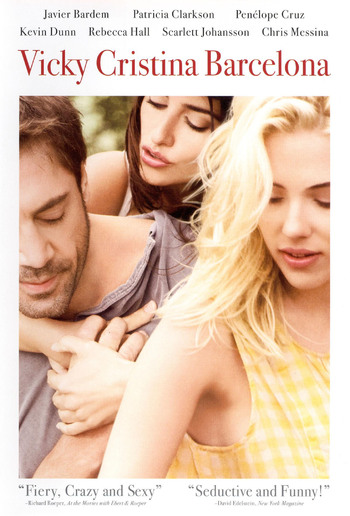 Life is the ultimate work of art.
Advertisement:

Vicky Christina Barcelona is a 2008 movie by Woody Allen, centered around the experiences of two young women in Barcelona. Vicky (Rebecca Hall) and Cristina (Scarlett Johansson) travel to Barcelona for the summer so that Vicky can work on her dissertation on the culture of Catalonia. They are hosted by friends of Vicky's family, Mark and Judy. One day, at an art gallery, Cristina notices a man and asks Judy about him. She tells them he is Juan Antonio (Javier Bardem), a painter rumored to have had a stormy, and possibly violent, relationship with his ex-wife María Elena (Penélope Cruz) which ended in divorce. Later that night, the two happen to have dinner at the same restaurant as Juan Antonio, who walks over to them, introduces himself, and invites them to spend the weekend with him in the small town of Oviedo. Vicky is repulsed by his boldness, but Cristina is intrigued, so they go. This decision results in experiences that cause both of them to re-examine their own lives and commitments.