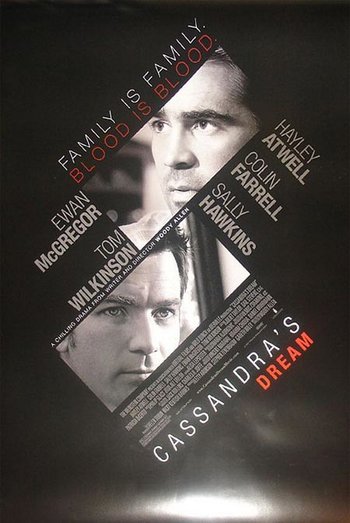 Cassandra's Dream is a 2007 dramatic thriller film written and directed by Woody Allen.

Brothers Terry (Colin Farrell) and Ian (Ewan McGregor), who live in South London, were raised by their mother Dorothy to look up to their uncle Howard (Tom Wilkinson), a successful plastic surgeon and businessman. Terry has a gambling addiction that sinks him deeper in debt, while Ian wishes to invest in hotels in California to finance a new life with beautiful actress Angela Stark (Hayley Atwell). To overcome their financial issues, they ask Howard for help. He agrees to help them, but asks for a favor in return: they must murder someone for him. Howard faces imprisonment for unspecified crimes and his future is threatened by a former business partner who plans to testify against him. Howard asks his nephews to get rid of Burns, and in return he will reward them financially. After initial reluctance, the brothers agree, setting in motion a series of tragedies.