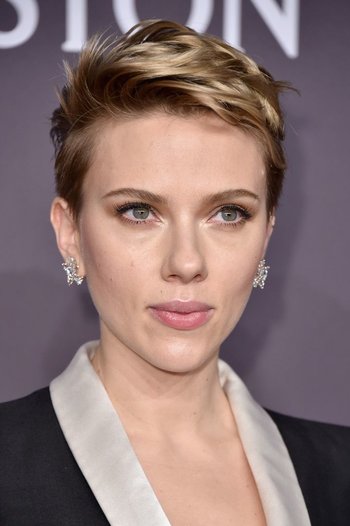 An Avenger, a cyborg, a punk rock porcupine, but most importantly, an utter badass.
"I would never knowingly go into a film that I wouldn't pay to see, or something that didn't challenge me."
Advertisement:

Scarlett Ingrid Johansson (born November 22, 1984 in New York City, New York) is an American actor. Her father was born in Denmark; her mother is a Polish-Russian immigrant of Ashkenazi Jewish descent (Johansson identifies as Jewish as well). She started acting at a young age, debuting in North, then later got attention for roles in The Horse Whisperer and Ghost World. She then broke through in 2003 with both Lost in Translation (which she won a BAFTA for) and the adaptation of Girl with a Pearl Earring. She has developed a close working relationship with Woody Allen, appearing in major roles in three of his films. She also won a Tony Award for her performance in the 2010 revival of A View from the Bridge. She's also Black Widow in the Marvel Cinematic Universe, a role that single-handedly made her the highest-grossing female actor of all time and the highest-paid female actor in the world.

Scarlett also has a music career goin' on. She first gained attention from indie kids for appearing onstage during the first concert of a reunited The Jesus and Mary Chain to sing backing vocals on "Just Like Honey." She then proceeded to make an album full of Dream Pop covers of Tom Waits songs, and managed to bring David Bowie to sing on one of the songs. She also appears on the compilation album Unexpected Dreams: Songs From the Stars

and on the song soundtrack for He's Just Not That into You; she's also performed the Oscar-nominated "Before My Time" for Chasing Ice (in which she doesn't appear) and "The Moon Song" with Joaquin Phoenix for her (in which she does appear...sort of).

She has herself a Villain Song in The Jungle Book (2016) when, as a Gender Flip version of "Kaa" she does "Trust In Me." Interestingly, although her singing is over the end credits, she had the second track on the soundtrack album.

Scarlett's directorial debut, unlike that of her one-time co-star Natalie Portman, was cut from the anthology film New York, I Love You; but fans of Miss Johansson (and Kevin Bacon, who stars in the short) can see it on the DVD as an extra. She was set to make her feature directing bow in 2014 with an adaptation of Truman Capote's Summer Crossing (as with the aforementioned short, she also scripted), but production was delayed (see the next paragraph for the most likely reason). She also co-directed the filming of an Ellie Goulding concert for American Express in November 2015.

In 2017, the live-action remake of the anime Ghost in the Shell (2017) starring Johansson was released, a project that had long been in Development Hell and received harsh criticism during its production for her casting, which received accusations of "white-washing". After nearly getting cast as the real-life trans man "Tex" Gill, it's become something of a running joke to theoretically cast her in the most inappropriate roles imaginable.

She was married to Ryan Reynolds between 2008 and 2011, and in November 2012, began dating French advertising executive Romain Dauriac. In September 2014, Scarlett gave birth to a daughter, Rose Dorothy, and she and Dauriac married on October 1, 2014 in Philipsburg, Montana. They divorced in 2017. In 2020, she married Saturday Night Live head writer and Weekend Update Anchor Colin Jost. She gave birth to their son in August 2021.

Example of:
A Mind Is a Terrible Thing to Read