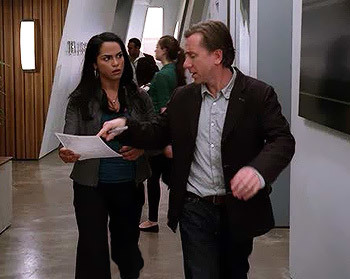 Having the characters walk from one end to the other of a large, contiguous set while talking to each other, while a SteadiCam operator walks backwards in front of them, allowing for a continuous, moving, Medium Two-Shot.

Creators use this technique to make an exposition-laden scene more energetic or convey how busy the characters are. Can take a lot of takes to get right, but can give us some impressive examples of The Oner. However, characters never seem to watch where they're going.

This shooting technique was revolutionized by West Wing co-creator and film director Thomas Schlamme (with input, possibly, from Aaron Sorkin), who used it first on Sports Night and developed the technique further on The West Wing. Works deliberately evoking Sorkin's style will tend to have the characters using Mamet Speak as they go. It's also common in computer-animated works, where it appears to serve as a 3-D alternative to the Wraparound Background. Also known as a pedeconference (by analogy to teleconference), especially on Television Without Pity.

May overlap with En Route Sum-Up. Not to be confused with Camera Chase, when a single person walks toward a retreating camera while narrating.