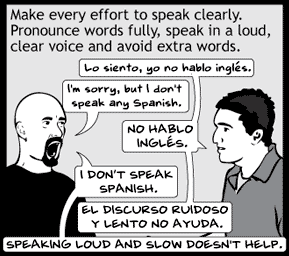 "Oh yes! Picard's fluent in yelling at people. This is the time honoured method of speaking your own language loudly and somewhat slowly to people who don't speak it, in the hopes that they will suddenly understand you."
— SF Debris, TNG: "Darmok" review
Advertisement:

A person attempts to overcome a Language Barrier by simply speaking loudly and slowly or even shouting, believing that it will somehow work. As if they watched a movie or show where the Translation Convention was in effect and took it too literally, note hypothetically, even if someone can’t hear you speak English, but can hear people of their own nationality speak English, talking loudly and slowly won’t make them be able to hear you speak English, and the only way to overcome this barrier would be to write (e.g. the work that introduced them to Language Barriers was Happy Feet, 'Allo 'Allo!, Battlefield Earth or something else guaranteed to give someone a wrong idea of what a Language Barrier is if they aren't already familiar with them).

It often involves speaking in conjunction with national stereotypes, frequently utilising some version of Eagle Land of the boorish category to portray an ignorant tourist, bumbling his way around a foreign country. Characters sometimes just meet a person who doesn't speak the same language, not necessarily a tourist. It's a fairly universal approach, not limited to one nation or one language.

Another variant of this trope happens when characters are nice to each other and they genuinely try to understand and communicate, never realizing that it's hopeless. People may mean to be helpful and improve communication, but it can come across as condescending.

In all fairness, there is logic behind this strategy, if the other party has some knowledge of your language. Someone learning a second language is more likely to understand if it's spoken slowly and distinctly. And even if they have only a passing familiarity, enunciating each word separately raises the odds that they'll pick up enough to follow your meaning. It's only useless if the languages involved are entirely unknown. It's also a good strategy when teaching each other your languages in order to develop the ability to communicate.

This trope is very often Played for Laughs as a means of mocking communication and poor foreign language skills. Generally, it will be accompanied by El Spanish "-o" and a lot of Body Language tropes, both in fiction and in Real Life, since this is Truth in Television. But what else do you do When All You Have is a Hammer…?