Film / Valerian and the City of a Thousand Planets 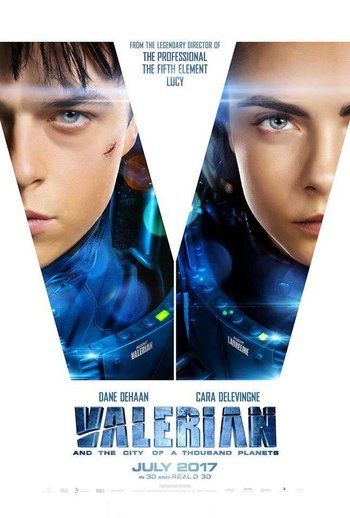 A universe without boundaries needs heroes without limits.
Advertisement:

Valerian and the City of a Thousand Planets (Valérian et la Cité des mille planètes), shortened to Valerian, is a 2017 American/French Space Opera film produced, written and directed by Luc Besson (of The Fifth Element fame). It is based on the French science fiction comic book series Valérian, and stars Dane DeHaan as Valerian, Cara Delevingne as Laureline, Clive Owen as Commander Arün Filitt, and Rihanna as Bubble.

In the year 2740, Valerian and Laureline are special operatives for the government of the United Human Federation charged with maintaining order throughout the universe. Valerian has more in mind than a professional relationship with his partner — blatantly chasing after her with propositions of romance. But his extensive history with women, and her traditional values, drive Laureline to continuously rebuff him. Under directive from their Commander, Valerian and Laureline embark on a mission to the breathtaking intergalactic city of Alpha. Alpha's thirty million inhabitants have converged over time — uniting their talents, technology and resources for the betterment of all. Unfortunately, not everyone on Alpha shares in these same objectives; in fact, unseen forces are at work, placing our race in great danger.

The film was released 21 July 2017 worldwide and on 26 July in France. The first trailer can be seen here.

Valerian and the City of a Thousand Planets provides examples of: